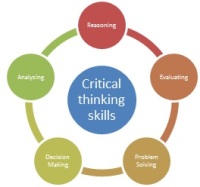 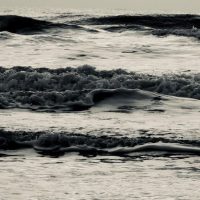 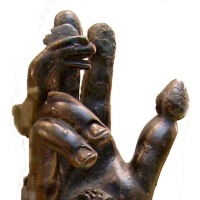 The next morning brings us rain for a change and we try hard to hitchhike. We find two French girls from the hostel sitting not far away on a wall, covered by an umbrella. They’d rather wait for hours than walk 5.5 kilometers to the next transport hub. But we prefer that and get off quite well. We make our way with short lifts from village to village to Inverness. One of the drivers is a farmer who proudly tells us that he brought in his hay yesterday, even though it was Sunday and the neighbors are looking at him crookedly because of it. Today everything would have gotten rained on, like everyone else’s.

Inverness is teeming with civilization, which confuses us to some extent after a long time in the backwoods. The people we ask for directions are all strangers themselves, which one can hear from the broad Scottish accent, because in Inverness they actually speak good standard English, as we have noticed several times on our trip so far.

However, we still find the right road (across the central highlands via Aviemore). We have barely placed ouselves, when a car from the AA Service stops (something like the German ADAC) and picks us up. On the way, a couple beckons whose car is parked on the side of the road. Our driver dutifully stops, but comes back quickly. “They just wanted a lift to the next workshop. Their car broke down, but they belong to another road club. „

In Aviemore he drops us off with the advice to inquire about accommodation in the youth hostel. If there aren’t any beds, he’d take us to Kingussie in two hours. There are even two youth hostels in Aviemore, but no vacancies. We don’t like Aviemore anyway. It is a fashionable ski tourist destination and accordingly expensive. So we continue to Kingussie with the AA gentlemen. On the drive I notice that the village shops bear the name ’Mackenzie’. I draw the immensely intelligent conclusion that we are on Mackenzie soil. On the way we consciously try for the first time to be invited to a free overnight stay. We use lamenting remarks about the possibility that there are no more beds in the youth hostel in Kingussie either, and what we should do then. But he doesn’t take the bait.

In Kingussie, our AA man makes inquiries at the youth hostel for us. He is friends with the Warden, whose name is Mackenzie. His name is also Mackenzie, but they are not related to each other. There are still beds available, he announces. He definitely seems happy about it. Maybe he even pleaded with the Warden to take us in, in order to get rid of us. In any case, we thank him profusely and enter the hostel full of expectations. „This hostel is full, we have no vacancies,“ the warden welcomes us. I almost start crying while the Warden can’t check his laughter. My best friend is more sensitive and notices immediately that he is pulling our leg.

His wife is a dragon, as we shall soon find out. When my friend wants to play the guitar in the bedroom, she shoots like lightning into the room and says that it can’t be done. When we ask „Why not?“ We get the answer: „It can’t be done, it’s not allowed!“ – We obey, but don’t understand it, because after all we don’t disturb anyone and we don’t smudge or destroy anything with guitar playing. Later a girl tells us that the woman was lurking behind the door to see if my friend would start playing again (refusal to obey  orders complex).

In the evening we go to a pub again, to the lounge, that is the nicer part for the ladies. There a long, ugly boy approaches us. He is from Glasgow and works at the hotel across the street. He offers us two beds in the servants‘ rooms, because then we could go to the folk festival tomorrow and would not have to be in the youth hostel at 10 p.m. We look at the premises, but they seem just as dubious to us as the whole guy. You can’t lock the door! In addition to all of this, I had noticed that the people in the lounge were all looking at us strangely. He seems to be a young man of ’bad reputation’.
Since we don’t know how to get rid of him right away, we go with him to the pub in his hotel. Against the lounge from before, this is a downright barn, but there is a TV, so it is packed! Our Casanova’s friend sits down next to us, a disgusting lardass. They are both a little drunk and talk a little carelessly. My girlfriend picks up a few things that we are ’unwilling’ or something similar. Finally the two apologize themselves for a moment, probably to coordinate things. I tell my friend about my observations in the lounge, which, together with what she has heard, makes us somewhat alarmed, and we try to inquire with people. „This boy is not good, he is a drunkard,“ my friend says to her neighbour. The good man just says: „Girls, if I were you, I would slap the door!“ – We then do that with unrefined haste and the whole pub starts to roar with laughter.

We spend the rest of the evening contemplatively in the common room. We meet some young people from the Flemish part of Belgium who eagerly speak to us in Flemish because for some reason they believe that we are from Belgium too.