My husband and I had passed the 80th year, and life began to get increasingly troublesome: little ailments, pains, stiffness of the joints, etc. etc. Then my husband was diagnosed with Alzheimer’s.

We had made a deal: no active help to die, but no artificial prolongation of life either. The healthier one would take care of the other one until he or she died.

I dissolved our household and sold, gave away, passed on to family members all our belongings and valuables. Then I found us a little disused farm in the north of Sweden near Haparanda, where nobody wants to live, close to the border to Finland.

There we pitched our tent in the summer of 2003. This is to be understood figuratively, as there stood a beautiful, cozy little wooden cottage, painted Swedish red with white edges. There was no running water and electricity in the house, of course, but it had a large iron oven, an old kitchen stove fired with wood, and a diesel generator for lights. What more would one need? A drawing well was right in front of the house. A young man from Haparanda helped us with the firewood. The long, dark winters were hard, but I was determined to hold out.

My husband went from bad to worse, until he did not recognize me anymore. It was a difficult time. One night in August 2006 he peacefully died in his sleep. I had had so many years to get used to this moment, but it still hit me hard. I was like paralyzed. What now? I would have liked to go together with him, to protect him from the inconveniences on the other side. He was an easy victim for pretty images that would lure him away from the actual path. Anyway, it obviously was not meant to be. I did not feel like I was near death either.

I could not bear to be in the house and decided to go into the woods. There I sat down at a little brook, leaning against a tree and started to get drowsy. After a while, I did not know how long I had slept, I woke up and saw a wolf standing in front of me looking at me intensely. I extended my arms and called: “Friend, help me to the other side!”

The wolf just looked at me and laid down across my legs to sleep. An irrepressible laughter rose up in me, and I would have liked to let it out, but I did not wish to disturb the wolf, which was lying there so peacefully. So I suppressed the laughter only just and accepted this weird situation. I even fell asleep again. Maybe it was all a dream?

Here the story could have ended.

But reality was different. I woke up from a gun shot. I felt a tremor going through the wolf and just thought: “Oh, no!”

There were three men. One of them had taken the shot. “Are you injured?” they called. I was furious and shouted at them: ”Have you lost your mind? Do you always have to spoil everything that is beautiful?”

They looked at me, uncomprehending, as in their eyes they had just saved my life. I bowed over the wolf and burst into uncontrollable sobs. 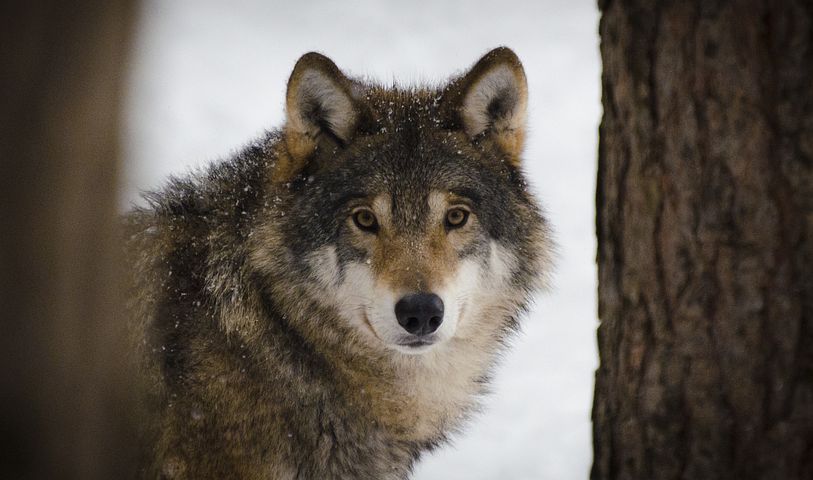